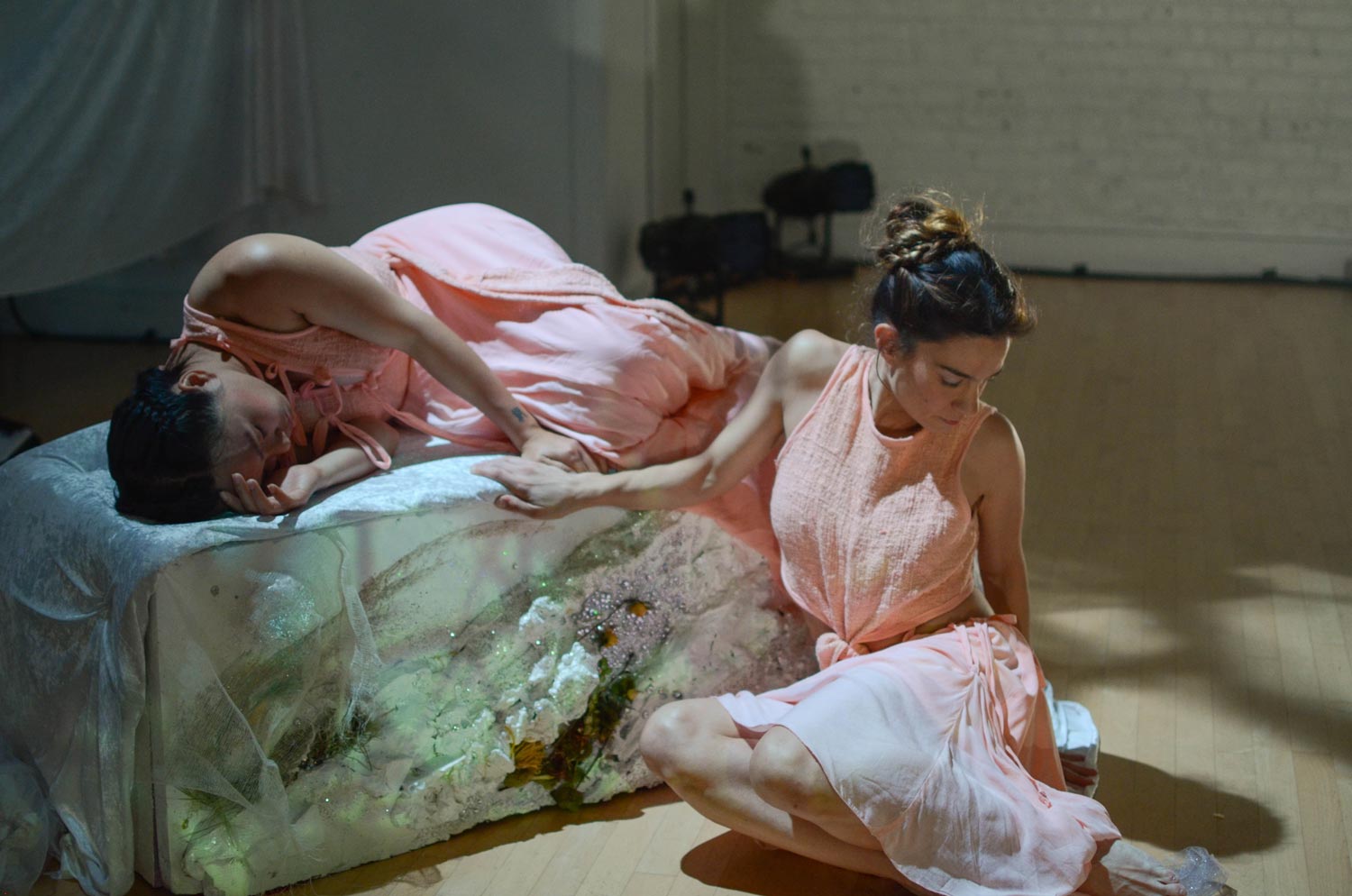 You almost feel you’ve stumbled into a bridal situation, with yards of tulle draped here and there, flowers littering the perimeter of the space, many glittery surfaces, and four nymph/bridesmaids in long peach gowns, seated or lying in graceful repose, waiting.

Beauty marks Dropshift Dance’s new “FloatBrilliance,” which closes Sunday at Links Hall, beauty in the design and in the dancing. Gentle, patient, searching, it starts in psychology, in the wholeness of an individual or of a relationship, but veers into philosophy, embodying the principles of action and reaction, control and its loss, affection and antagonism. Consistently divided into duets, it suggests symbiotic relationships — which can be beneficial or destructive, and sometimes both at once.

Live and recorded ambient music by Elliot Cless and Luke Gullickson creates a sonic wash of various intensities and allusions: Though strings and piano can sometimes be heard, so can electronic simulations of what seems like a jet taking off and the sounds of water — rain, a wave crashing. Projections of a sunrise or sunset, of lightning flickering in darkness, of a watery surface dotted with boats appear now and again on a billowy, sparkly curtain.

At least, I think that’s what these images were. The audience was seated on cushions arrayed around three sides of the space, and I was at the far end of one side, very near but almost behind the settee/bed/altar that was the set’s focal point.

As directed by Andrea Cerniglia, the fluid, integrated movement of “FloatBrilliance” intentionally blurs the line between volition and passivity. For many minutes early on, Jill Moshman and Colleen Welch sit side by side facing into a corner, their drooping heads relaxed together; from a perspective far behind them, a footlight burning into their faces created a glow. A slight motion, perceptibly initiated by neither, eventually turns into rocking, a pendulum.

Meanwhile the focus is on Cerniglia and Weichiung Chen-Martinez, who form a riveting relationship with each other and, rarely, with the audience. Intimacy, trust, care — each closes her eyes at points to be manipulated by the other — come across most forcefully, but there’s also something impersonal, even antagonistic, about their interactions. As Cerniglia repeats the motion of crooking an elbow and flicking a hand, Chen-Martinez watches like a cat about to pounce, aiming to interfere with or control the movement.

About midway through “FloatBrilliance,” Moshman and Welch begin their more kinetic but less intense duet; it’s as if all the movement dissipated feeling. At this point my attention began to flag, except during an almost comical musical-chairs sequence on the settee for all four dancers, with gestures traveling from one to another person: gazing into a palm as if into a mirror, fists brought to the mouth in mock horror.

“FloatBrilliance” is exceptionally well made, knitting together all the symbiotic nuances of relationship, whether between two people or between parts of the self. But it begins to feel airless, even claustrophobic. Like a 19th century, well-made play, it is a closed system. Actions become predictable; the long, slow, inevitable finale, which brings the work full circle, is a slog. It doesn’t help that the audience is asked to sit on the floor for nearly an hour and a half. That would detract from anyone’s experience, anytime.

Laura Molzahn is a freelance critic.

Freelance contributor Laura Molzahn has written about dance for 25 years at publications including the Chicago Tribune, Dance Magazine and the Chicago Reader. A native Minnesotan, she attended Carleton College, UIC and Northwestern University, where she earned a doctorate in English. She tells herself she likes the challenge of verbalizing nonverbal art forms.