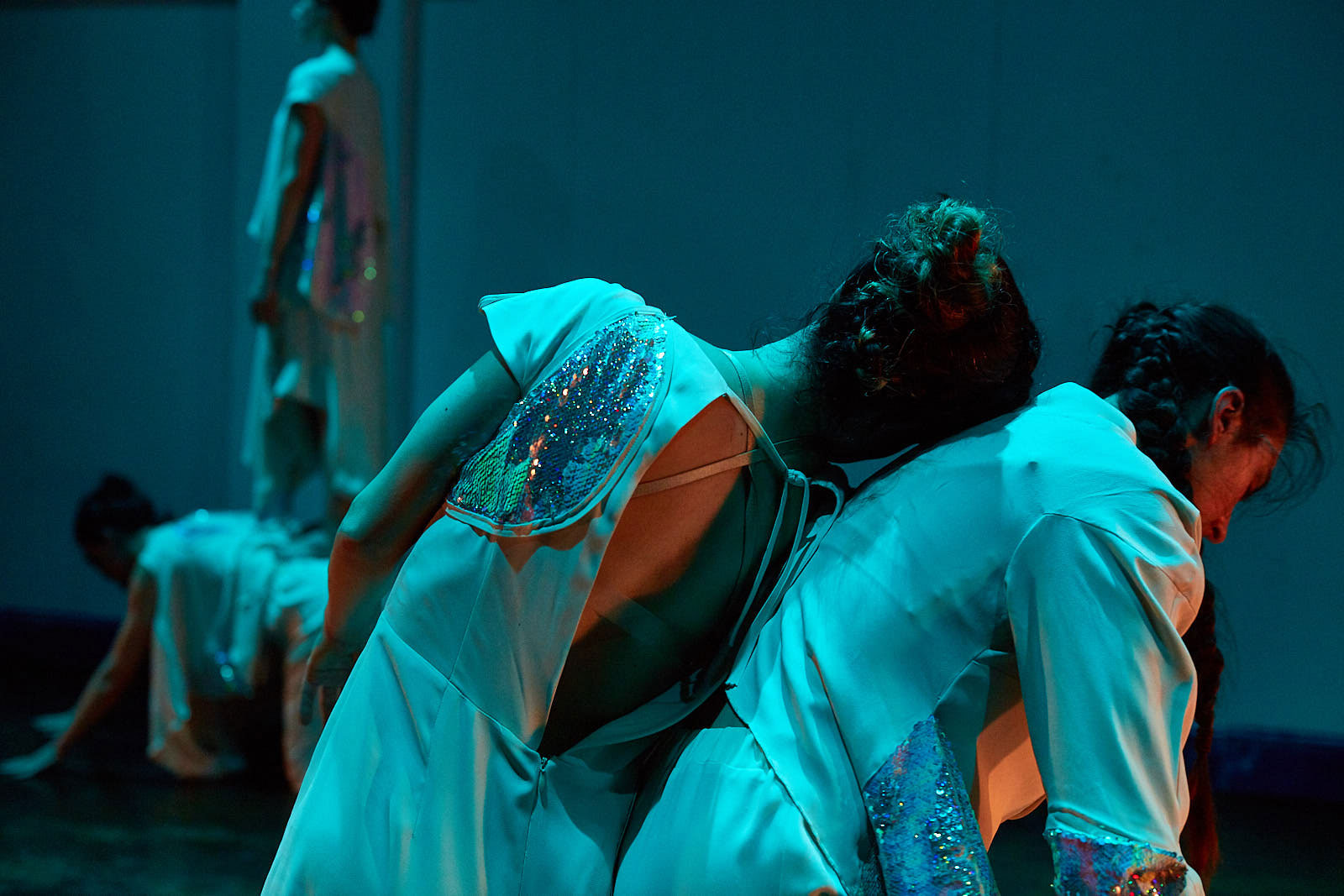 There are two basic timelines for any choreographic process. In the churn and burn world of big budget companies, two months can be a luxury, with as little as a week or two afforded to many choreographers creating for companies who present work multiple times a year.

Then there’s the long game: an approach which can take months or even years to develop a work, created through intensive research and many, many rounds of editing. Andrea Cerniglia has always opted for the latter, staying with an idea for years at a time. And after two years, the final version of “Nook,” performed by her company Dropshift Dance, premieres this weekend at The Charnel House in Logan Square.

“With this work, I had a lot more time to be in public spaces showing the work along the way, which felt richer for us,” said Cerniglia in an interview. As she built “Nook,” she showed previews and in-progress versions at Comfort Station last August, SITE-less, various festivals, and in a February double bill with Emma Draves.

“What was nice about each juncture was that I got to take things and throw them away,” Cerniglia said of “Nook’s” multiple in-progress performances. Previous iterations looked vastly different from the current version, in part because they responded to the setting – an empty storefont with Draves, a built-in set at SITE-less – and featured different numbers of dancers and sections of the piece.

These showings also didn’t include one of the major components of “Nook,” a trio of dance films directed by choreographer, photographer and filmmaker Nadia Oussenko. “This has been almost two years in the making,” Cerniglia said of her collaboration with Oussenko, who she’s known since their days working for Zephyr Dance. “It felt really organic. The movement piece has been going for almost two years as well, so there’re lots of layers.”

It’s not the first time they’ve collaborated. Oussenko’s initial relationship with Cerniglia was as a documentarian, and she most recently developed video for Cerniglia’s 2017 “The Remains.” But in “The Remains,” which came last in a four-part series begun in 2014, Oussenko’s role was understated, her atmospheric imagery projected onto the scenery and part of the environment. Put another way, Oussenko was part of the design team; here she’s a co-creator, her dance films interspersed between sections of choreography created by Cerniglia and dancers Monica Carrow, Christina Chammas, Alexandra Naranjo and Bonnie Christine Willis.

Bits and pieces of this movement are echoed in each film, which are set in three gorgeous landscapes: at the beach during sunrise; against a brick wall in the rain; and in a cavernous, pillared room at High Concept Labs. Said Oussenko, “Being able to work with someone else’s movement and still feel like I have ownership over it, in a way – it feels like I get to put my artistic input into it. It’s just a really fun collaboration.”

The extra time spent and ability to garner public feedback is a benefit for any choreographer, but especially important to those who experiment with their seating chart and perform outside of proscenium settings. Since its founding in 2009, Dropshift has encouraged audiences to sit anywhere they want, explore the space and move about freely. It inevitably leads to some interesting interactions between the audience and the performers – a quasi-social experiment testing the limits of personal space and how dancers respond to unpredictability.

To that end, “Nook” has layers of meaning which includes an inquiry into how the body responds to physical connections. That could mean the experience of movement – Cerniglia will offer an optional, pre-show, mini-movement opportunity for audience members to partake on Sunday evening – or being in physical contact with others. The topic of touch – a source of great debate in today’s society – can be comforting or contemptuous, depending on the context, and while dancers relish the experience of leaning into and rolling around on each other, audience members can be fiercely defensive about personal space.

In their usual way, Dropshift oscillates between pragmatism and theoretical artistic questions, encapsulated within a beautiful, dream-like atmosphere. What’s different this time is that Cerniglia’s typical minimalism is instead effervescent, refreshingly abundant, and in moments, I dare say virtuosic. And while her connectivity to the body and innate sense of time, space, effort and flow, guided by her training in Laban Movement Analysis, are one of the layers, perhaps more prominently present is an overarching connection to nature which permeates each film and section of dancing.

That, and, there are the robust contributions of composer Luke Gullickson, costume designer Collin Bunting and lighting designer Richard Norwood, who’ve long been Dropshift collaborators. Look for the little surprises and connections which bubble up among all these artistic elements – light bouncing off the overlapping sequins sewn against the grain on Bunting’s otherwise flowy, ecru frocks, for example, and the similar shimmering of the early morning sun across the water as Cerniglia sways to and fro, knee deep in Lake Michigan in the opening film. These images are echoed in the washing of hands onstage and swirling sounds of Gullickson’s score, or in the comforting cuddle puddle of dancers lounging in a cozy nook upstage. It’s maybe not so important to identify or intellectualize all these layers in the moment, but soaking it all in collectively, it’s a joy to come upon them and realize they’re there.

Disclosure: Dropshift Dance appeared in a series of performances the author produced in 2011.