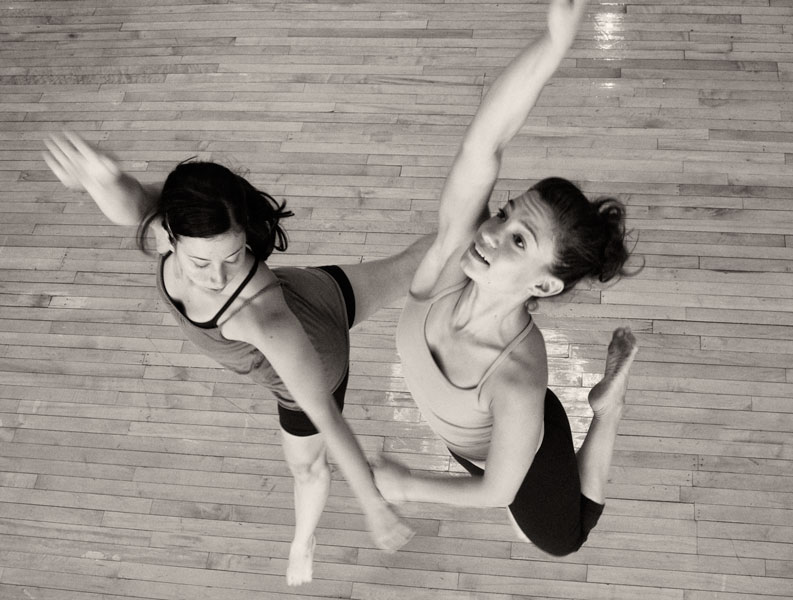 To compare dance with food—which I’m allowed, now that I no longer write for a publication that forbids it categorically—Zephyr Dance member Andrea Cerniglia’s choreography brings to mind Julia Kramer’s TOC review of Arami, especially the following sentence, which I’ve updated accordingly:

“ Her presentations of raw fish spatial studies employ simple visual elements — plays on opposites, formal rigor—to construct plates dances that are enchanting and graceful. And when  she goes beyond  the obvious influence of Zephyr’s style,  she does so with sophisticated ease.”

Cerniglia launched a new group, Drop Shift Dance, last night with “In Between Ourselves,” a brief collection of premieres repeating tonight and Saturday 11. It’s billed as five pieces, but really, it’s two sets of pairs and a longer trio. Duets mine, yours and our run back-to-back, linked by a crossing of paths, as do light beneath my skin I and II, solos danced by Cerniglia and Nicole Scatchell, respectively. Trio undertow, for those two and Allyson Esposito, closes out a tidy hour.

Cerniglia doesn’t throw a whole lot of ideas at us, unusual for a choreographer’s first time out. There’s a restraint to how she’s testing the waters of her dancemaking skill, echoed by her titles’ total avoidance of uppercase letters.

The pair of duets is cleanly about opposites. To a spare violin-and-double bass score “produced and arranged” by Jamie Topper (musicians Ronnie Kuller and Weldon Anderson are credited, but there’s no composer designation), the two who dance mine, yours spend all but their final moments on the floor, sharing the same “front,” and executing cooperative tasks like a tricky little balancing of feet on feet. In our, a different pair begin by striding around the floor in perpendicular patterns and dancing phrases that are set 180 degrees to one another. Right matches right and left matches left—they’re not mirror images. So in both cases, the dances also contradict their titles, a satisfying garnish.

The solos that follow, to piano and electronics by German duo Swod, focus on color (purple and green in I, red and white in II, both beautifully lit by Rich Norwood) and two motifs: the grand presentation of a forearm, and the holding of one hip with both hands. Cerniglia, in the first iteration, looks confident and pleased, but muted; in the second, Scatchell’s eyes begin closed, then open and dart around the room, occasionally at us in the audience. (In a note, Cerniglia says the works are dedicated to her grandmother, “who remembered to always have a special twinkle in her eye.”) Scatchell repeats actions in various parts of the room, as though doing the right thing in the right spot at the right moment will unlock some cosmic door. She looks neither confident nor pleased. Again, different tones that play off each other, but subtly so. As with good sushi, the primary flavors are balanced.

undertow “tastes” somewhat off in comparison. The three begin by drifting in their own worlds, but fall into unison as though scooped out of water in the same giant net. (Norwood’s stagecraft is again an effective wrapper for the proceedings: Initially quarantined in separate boxes of light, the dancers’ containers disappear in unison with the appearance of unison.) During a central section, their weaving, crisscrossing patterns are walked, run and sort-of-speed-skated backward; I imagined these women were trying to untangle an enormous, invisible knot. In the show’s only use of text, they periodically speak numbers in turn. There’s a slight, building dissonance that suggests danger, but I can’t imagine being swept away in a more politely abstract manner.